All of Us Together 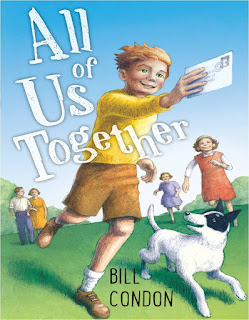 Today's guest is CBCA multi-award winning author Bill Condon whose latest book, All of Us Together, was recently published by About Kids Books (http://www.aboutkidsbooks.com) Bill kindly offered to answer some questions about this family story which goes straight to the heart.

Why did you set your book All of Us Together in Australia during the 1930s Great Depression?
I suppose the main thing was that it seemed a very interesting time in Australia’s history, and one that was brimming with possibilities for a writer. Also, today’s children probably don’t know much, if anything, about the hard times their ancestors lived through. I thought that writing a family story set in that time was a good way to give them an understanding of the Depression. But I should point out that I wasn’t interested in giving any kind of history lesson. For me, the historical aspect is very much in the background. First and foremost, I tried to write a story that would keep kids turning the pages.

The seeds of this book were probably first sown when I was in my teens, perhaps even younger. Back then my parents used to tell me about their experiences in the 30s. Like most young people, I probably didn’t listen very closely, but I must have been tuned in subconsciously. And so, when I was hunting around for a new project, the Depression gradually bubbled up to the top of the list.

Was your own family anything like Daniel's?
In lots of ways, yes. Like Daniel, the main character in All Of Us Together, I have two sisters. In my story, Daniel is the oldest, whereas in real life, I was the youngest – and I still am! My mum and dad were working class people, the same as Daniel’s parents. And the really big similarity between his family and my own is that, like Daniel and his sisters, we had the great good fortune to have loving and kind parents.

What would you say are the themes of All of Us Together?
I didn’t set out to write a themed book, or to be moralistic or preachy. I think that would be death to any story. However, themes do emerge. Daniel’s parents teach their children to be honest and to respect others. Of course, honesty is not always easy, so when Daniel makes mistakes, he knows he has to take the consequences. The love and support one gets from family is also evident, as are issues related to mateship, bullying, and coming to terms with grief.

How long does it take you to write a book?
It’s very hard to give an accurate answer. I started All Of Us Together last year, and worked on it for several months before consigning it to the Too Hard Basket. In January of this year I changed it from third person to first and dived back into, starting all over again. This time I didn’t quit and it took about seven or eight months to finish. So with this one it’s been well over a year. Some of them take a lot longer.

You have won quite a few book awards: how important are they to you?
I’d be lying if I said they didn’t matter. Just about every writer surely dreams of winning the glittering prize. However, I think there is a lot of luck involved in it. The year I won the Prime Minister’s Award (2010) all the other shortlisted writers had reason to be confident. Each of them had won other awards or been shortlisted. Mine was the only book that hadn’t had any previous success. I’m sure if there had been betting on the result I would have been a rank outsider. There are so many good books that I feel should have won awards, but which missed out. What I try to remember is that the glitter vanishes quickly, and few remember who won last year’s big prize. And too, just being published is a pretty big deal.

Have you started on your next writing project?
Not yet. It isn’t that long ago that I finished All Of Us Together and so I think I’m a little more brain-dead than usual. Hopefully that won’t last much longer.