THE LEGEND OF THE THREE MOONS

THE LEGEND OF THE THREE MOONS by Patricia Bernard (Clan Destine) 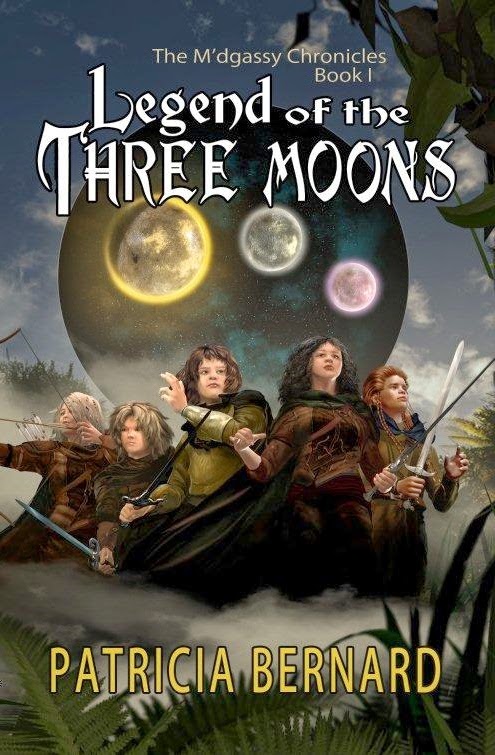 Patricia, how did The Legend of the Three Moons come into being?


I was worried about my grandchildren spending so much time indoors, watching TV, playing computer games and doing homework so I took the five of them to Centennial Park, where after handing them a stick to become any weapon they liked, I told them the park was a forest that changed daily and that they could not leave and that to complicate everything they had a 24 hour memory.


I also gave them the choice of one magical gift each left to them by their royal parents who had been kidnapped and shape-changed by the High Enchanter when their beautiful aunt had refused his hand in marriage, as had been promised to him by their grandparents the Old King and Queen of M’dgassy.


We played in the park the rest of the day adding more and more characters such as Hannah the Hangwoman, Jessup the six fingered shape-stealer of Belem, and San Jaagin the birdman.


By the time we went home I had the beginning of The Legend of the Three Moons, a teenage quest adventure which has blossomed into The Night Parrot Boy and its sequel, The Gates of Doom.


The book can be purchased from the publisher and from good bookshops where they can be ordered, such as Dymocks of Bondi Junction, Beecroft Children’s bookshop and Bloomin Books Caringbah. Distributed by ABC (Australian Book Group)


Check out the book at htpp://wwwthreemoons.com.au, where you will also find teachers’ notes.