Blotch: All Paws to Chile 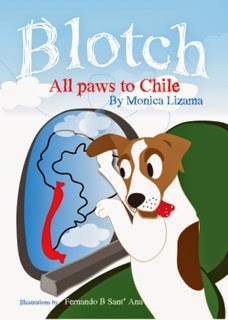 I love dogs. I started dreaming of having a dog when I was in my nappies.


For hundreds and hundreds of reasons, I didn't have a chance to share my life with a dog. Until … One night coming back home, thinking of retiring from work, I found a little Jack Russell in my backyard. The idea of writing about Blotch came up there and then!


Blotch means Manchas in Spanish, but as she is so small … Manchitas is the right translation: Blotch = Manchas.

Blotch is very distraught when his two-legged owner, Isabel, receives an invitation to visit her grandfather in Chile and accompany him to Antarctica, but Blotch isn’t invited because he isn’t allowed on the airplane! Horrified by the idea of being without his girl for two months, the innovative dog stows away on the airplane and gets himself a free ride to Chile. Isabel is eventually delighted to have her dog with her, and her plucky grandfather is thrilled to have them both. The author does a wonderful job weaving in rich details about Chile via Blotch’s observations and reactions to his environment.


When Blotch is abducted, he resourcefully escapes and befriends a Husky heading south. They encounter adventures on their way to finding their loved ones. Blotch’s ebullient warmth toward all living creatures is endearing, as is his vulnerability when things get too scary, whether it’s a huge ferryboat to Antarctica or a life-sized statue of a creature resembling a bear. Like many dogs, Blotch pees where he shouldn’t, digs up old bones and almost falls off a boat in his effort to bond with the dolphins, making the book realistic fun for young dog lovers. Sant’ Ana’s illustrations are charming and endearing.


Despite the rich culture and high adventure, the tale is primarily a series of episodic events without much conflict or growth, aside from the achievement of short-term goals. The fast-paced adventures keep things moving fairly well, however. At times, the story reads a little like a tour book, with Isabel often looking up things on her iPad and reading facts aloud. Unfortunately, a key mistake—Antarctica’s coldest season is cited as being minus 8 degrees Celsius instead of minus 80—casts shadows on the accuracy of the facts about Chile and Antarctica that fill the book.