Book trailers! Every author and his dog has one these days. So you’re probably thinking of getting one for your next book. A word of warning, though… make sure it’s not boring.


Gamers’ Rebellion, the third book in my Gamers trilogy, was released in July… and along with it, the third book trailer in the series. So I thought now was a good time to sit back and assess the three trailers. 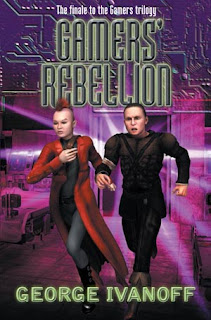 There are LOTS of book trailers out there. Just take a look at YouTube. The sad truth is that a large percentage of these trailers are, at best, a tad ordinary, and at worst, downright boring. You know the sort of thing… a bit of difficult to read text overlaid on stock images that barely have any relevance to the book, with some bland royalty-free muzak in the background. And, of course, the whole thing goes on just a little bit too long.


I quickly realised that this would mean getting someone else to make them for me.


My Gamers novels are set within a computer game world, so I wanted computer graphics in the trailers rather than stock images. I had very strong ideas about the music. And I wanted a continuity and progression from one trailer to the next. I also wanted them to reflect the computer game nature of the books and be appealing to the target audience of game-playing kids and teens.


Each trailer uses the same music theme… but in a different arrangement for each book. For Gamers’ Quest, the theme is very electronic, computer-gamey and a bit like a tv show theme. The second book, Gamers’ Challenge, is faster paced and crosses many more computer game worlds, so the theme has been given a more frenetic, techno arrangement. The third book, Gamers’ Rebellion, is partly set outside the game world and has a grittier feel, so the theme has been rearranged with grungy guitar sounds.


Each trailer begins in the same way, with computer text, typing across the screen, giving way to computer graphics with some stylized animation. It is all deliberately very game-like.


Has it worked? Has it been worth it? YES!


I’ve had a lot of positive feedback on these trailers, particular from kids (which is a good thing, since the books are aimed at kids and teens). YouTube viewings aside, these trailers have been useful as attention grabbing tools during school visits. The combination of music and computer graphics has proven to be an effective way for beginning presentations to large groups of kids.


I’m sure the trailers will not be everyone’s cup of tea, but they are representative of the books, and they are certainly not ordinary. Take a look and see what you think…


George Ivanoff is a Melbourne author and stay-at-home dad. The has written over 70 books for kids and teens, including novels, chapter books, school readers, non-fiction books and even a short story collection. His latest novel is Gamers’ Rebellion, which completes his Gamers trilogy. Check out his website: georgeivanoff.com.au